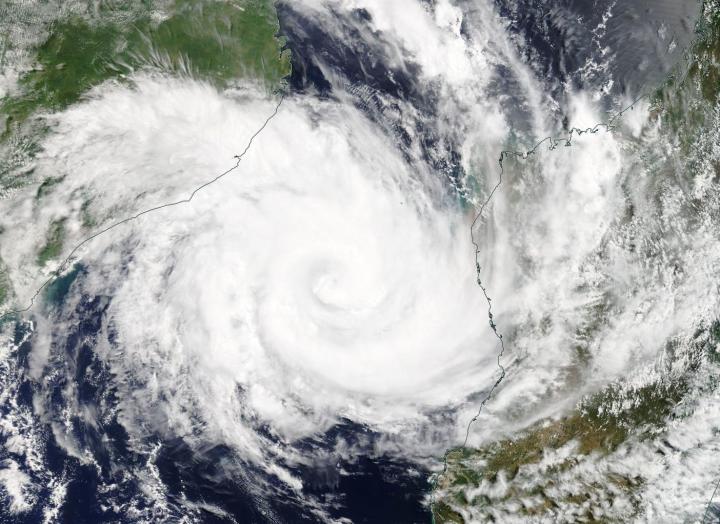 IMAGE: On March 12 NASA’s Terra satellite captured a visible image of Tropical Cyclone Idai in the Mozambique Channel of the Southern Indian Ocean. Idai was located between Mozambique (left) and… view more

NASA’s Terra satellite passed over the Southern Indian Ocean and caught a visible image of Tropical Cyclone Idai in the Mozambique Channel. The channel is located between the country of Mozambique on the African mainland and the island nation of Madagascar.

On March 12 the Moderate Resolution Imaging Spectroradiometer or MODIS instrument aboard NASA’s Terra satellite provided a visible image of Tropical Cyclone Idai. Satellite imagery showed Idai maintained a well-defined eye, although still obscured by high clouds. Idai appeared to be almost directly between Mozambique and Madagascar. Both countries have advisories in effect on March 12.

The Joint Typhoon Warning Center forecast calls for Idai to re-intensify as it moves southwest, peaking at 100 knots (115 mph/185 kph) before making landfall near Beira, Mozambique after 3 days.

For advisories from the Mozambique National Meteorological Institute (in Portuguese), visit: http://www.inam.gov.mz/index.php/pt/novo-sistema