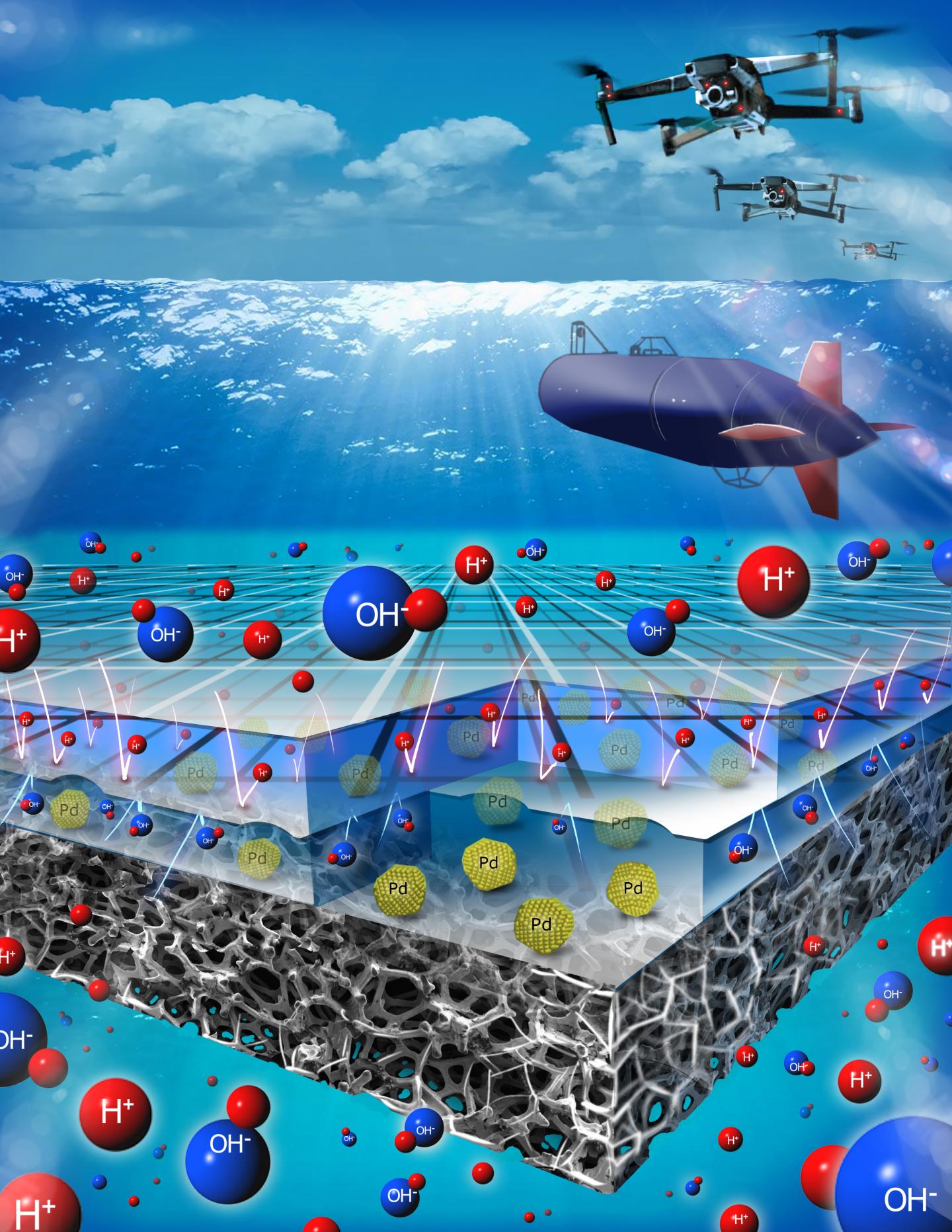 IMAGE: This is an artistic representation of the pH-gradient enabled microscale bipolar interface (PMBI) created by Vijay Ramani and his lab. The two layers that make up the interface are covering… view more

The transportation industry is one of the largest consumers of energy in the U.S. economy with increasing demand to make it cleaner and more efficient. While more people are using electric cars, designing electric-powered planes, ships and submarines is much harder due to power and energy requirements.

A team of engineers in the McKelvey School of Engineering at Washington University in St. Louis has developed a high-power fuel cell that advances technology in this area. Led by Vijay Ramani, the Roma B. and Raymond H. Wittcoff Distinguished University Professor, the team has developed a direct borohydride fuel cell that operates at double the voltage of today’s commercial fuel cells.

“The pH-gradient-enabled microscale bipolar interface is at the heart of this technology,” said Ramani, also professor of energy, environmental & chemical engineering. “It allows us to run this fuel cell with liquid reactants and products in submersibles, in which neutral buoyancy is critical, while also letting us apply it in higher-power applications such as drone flight.”

The fuel cell developed at Washington University uses an acidic electrolyte at one electrode and an alkaline electrolyte at the other electrode. Typically, the acid and alkali will quickly react when brought in contact with each other. Ramani said the key breakthrough is the PMBI, which is thinner than a strand of human hair. Using membrane technology developed at the McKelvey Engineering School, the PMBI can keep the acid and alkali from mixing, forming a sharp pH gradient and enabling the successful operation of this system.

“Previous attempts to achieve this kind of acid-alkali separation were not able to synthesize and fully characterize the pH gradient across the PMBI,” said Shrihari Sankarasubramanian, a research scientist on Ramani’s team. “Using a novel electrode design in conjunction with electroanalytical techniques, we were able to unequivocally show that the acid and alkali remain separated.”

Lead author Zhongyang Wang, a doctoral candidate in Ramani’s lab, added: “Once the PBMI synthesized using our novel membranes was proven to work effectively, we optimized the fuel cell device and identified the best operating conditions to achieve a high-performance fuel cell. It has been a tremendously challenging and rewarding pathway to developing the new ion-exchange membranes that has enabled the PMBI.”

“This is a very promising technology, and we are now ready to move on to scaling it up for applications in both submersibles and drones,” Ramani said.

Other participants in this work include Cheng He, a doctoral candidate, and Javier Parrondo, a former research scientist in Ramani’s lab. The team is working with the university’s Office of Technology Management to explore commercialization opportunities. Birth control and books can slow down climate change – The Verge