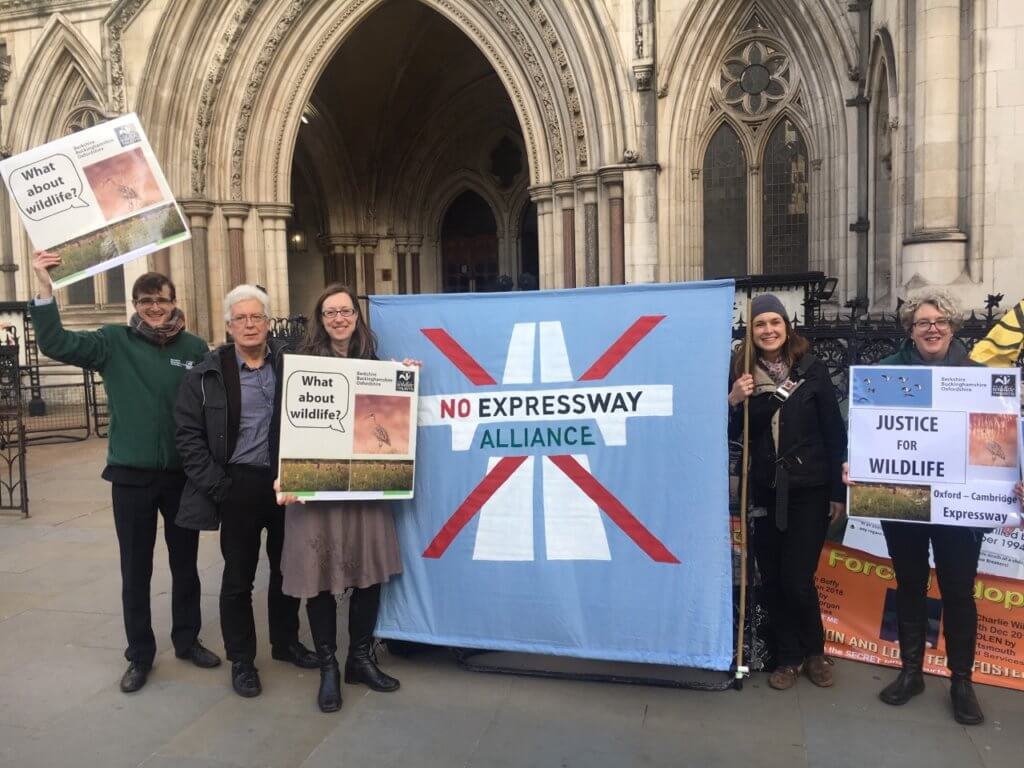 Yesterday I was in London so I had the opportunity to pass by the Royal Courts of Justice and wish these campaigners the best of luck.

Last month the High Court refused permission for Berks, Bucks and Oxon Wildlife Trust’s (BBOWT) claim against the government regarding the Oxford to Cambridge Expressway – the story is here:

BBOWT is arguing that the government has failed to assess the environmental impact of its plans, before choosing the corridor of land within which the Expressway and related housing will be built. They believe a Strategic Environmental Assessment on a project of this magnitude needed to be undertaken.

Their hearing was held yesterday and they won! Congratulations to them for getting some justice for wildlife.

In response to the High Court decision, Matthew Stanton, Head of Planning, Policy and Advocacy, at Berks, Bucks and Oxon Wildlife Trust, said:

‘We are so pleased with today’s decision surrounding the government’s proposed corridor for the Oxford-Cambridge Expressway. We were forced to bring legal proceedings because the government has completely ignored European law, which requires a Strategic Environmental Assessment for schemes that impact on the environment such as this.

Today shows us that the government has a case to answer and we look forward to fighting for wildlife at the full hearing.

We will continue to scrutinise the government’s future consultations, defend wildlife in the planning process, and make sure that the potential impact of this concrete corridor is fully assessed and made public.

The Oxford to Cambridge Expressway could be a disaster for wildlife, and future generations may not forgive us if we fail to speak up.’.

‘The court has agreed with our client that there is an arguable case to be heard and we look forward to a substantive hearing of the important issues raised. BBOWT believes that the Government has failed to properly consider at an early stage the environmental consequences of a major infrastructure project.

Although a public consultation is due to take place, the Government has missed a key opportunity to listen to the public and environmental organisations and ensure that their concerns are taken into account early in the decision-making process. By ignoring concerns and refusing to undertake a Strategic Environmental Assessment key stakeholders and members of the public have been alienated from the process.’.

There is a long way to go, but this is a significant step in the right direction. Well done to a small-ish Wildlife Trust for standing up for the law and for wildlife.

BBOWT is raising money for their work in this area and I have just made a small donation – I think I made one earlier too!