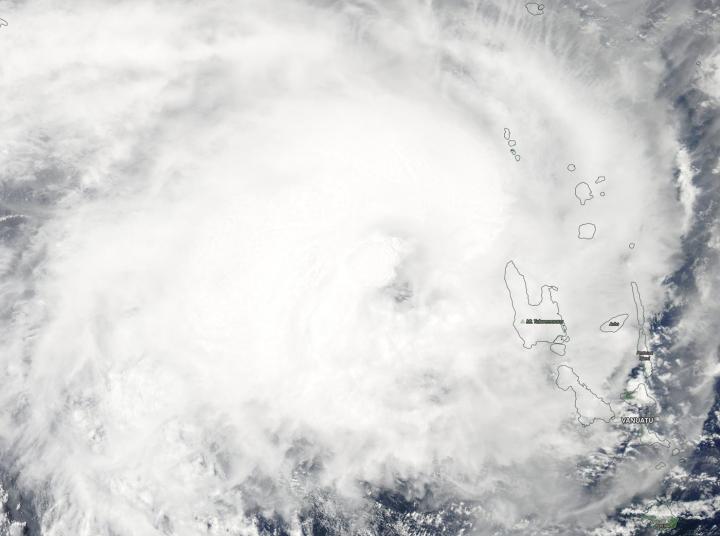 Visible imagery from NASA’s Aqua satellite revealed the center of Tropical Cyclone Oma was just northwest of the island of Vanuatu in the South Pacific Ocean.

Vanuatu consists of roughly 80 islands that stretch about 808 miles (1,300 kilometers).

The Vanuatu Meteorology and Geo-Hazards Department (VMGD) issued Tropical Cyclone Warning Number 18 for the Torba, Sanma, Penama and Malampa Provinces. Those provinces can expect heavy rainfall and flash flooding over low lying areas and areas close to the river banks. In addition, coastal flooding will continue.

The Vanuatu National Disaster Management Office (NDMO) noted that a red alert remains in force for Torba, Sanma, Penama and Malampa provinces, while yellow alert is in effect for the Shefa province.

On Feb. 14, 2019, the Moderate Resolution Imaging Spectroradiometer or MODIS instrument aboard NASA’s Aqua satellite captured a visible image of Tropical Cyclone Oma. The image showed Oma’s center northwest of Vanuatu. The image revealed a large area of bands of powerful thunderstorms wrapping into the low level circulation center, with most convection (rising air that forms the clouds and thunderstorms that make up the tropical cyclone) displaced to the north of the low-level center.

The Joint Typhoon Warning Center expects Oma to continue to move away from Vanuatu in a southwesterly direction. From rain to flood

OFFSHORE WIND: Can states turn their goals into reality?