Protecting the field of dreams 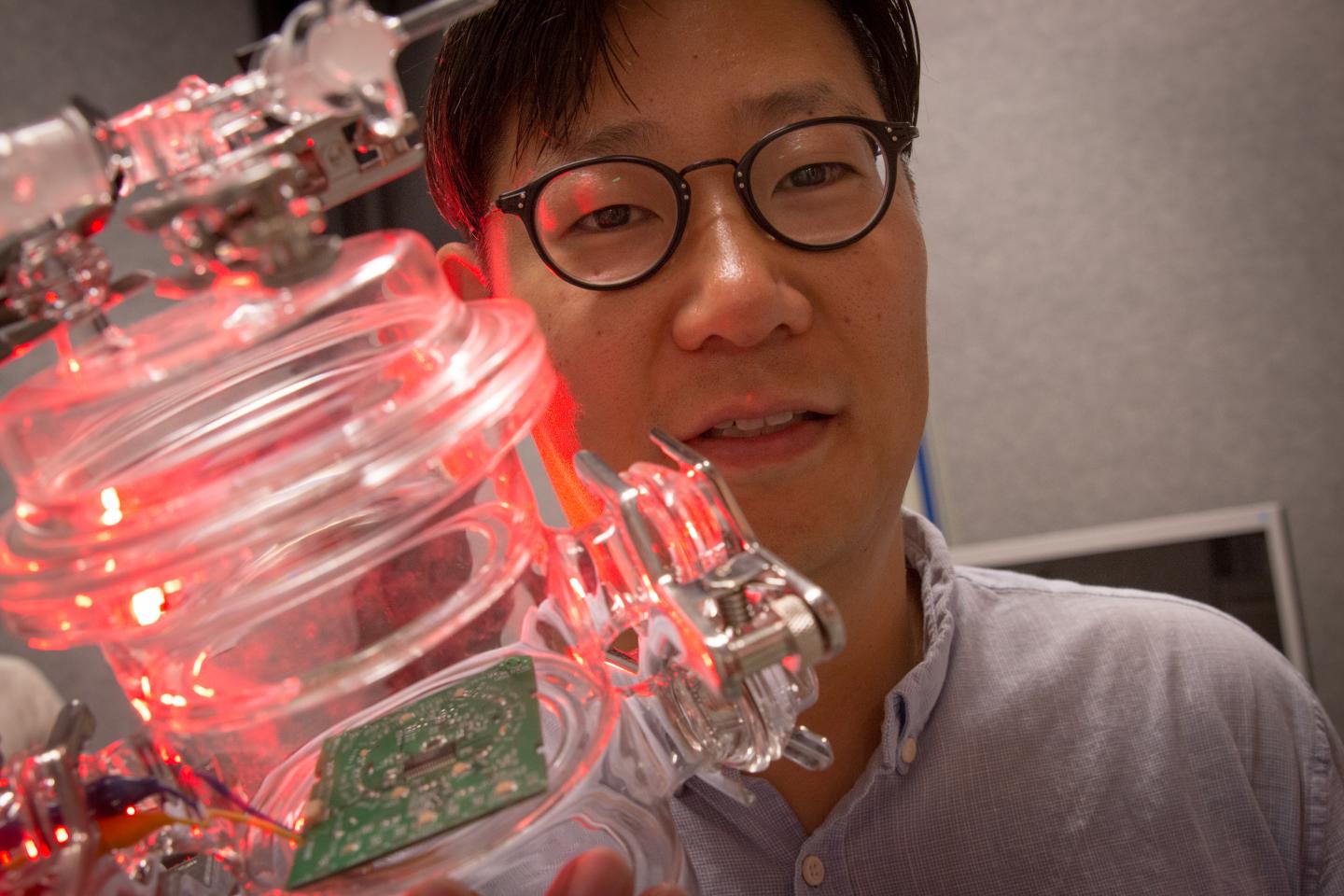 IMAGE: University of Utah electrical and computer engineering associate professor Hanseup Kim holds one of his low-power sensors in a testing gas chamber. The sensor will be used to sniff out… view more

Jan. 29, 2019 — Plants have important things to say, and University of Utah electrical and computer engineering associate professor Hanseup Kim wants to listen to them.

He leads a team of U engineers who have received a $2.2-million grant from the U.S. Department of Energy to design and build small chemical sensors that can “sniff” out when a plant is being attacked by insects or overwhelmed by weeds. The research is to benefit the production of biomass from corn, which is used to create ethanol for gasoline.

The research is based on a concept that corn stalks emit certain organic compounds when they are broken or damaged. So when insects like grasshoppers begin to chomp on corn stalks, these compounds are discharged so that predators can sense when insects are nearby, a type of natural defense mechanism for the plant, Kim says.

The team will be developing a low-power sensor that detects when these chemicals are present, alerting a farmer that insects must be attacking a section of the cornfield. The sensors, which will be connected to a network, will also potentially reveal when weeds begin to grow because those pesky plants also emit gases when they germinate.

The chemical sensors will be based on a design that Kim has already been working on — devices that operate on only 100 picowatts (a picowatt is one million millionth of a watt) as a standby power and turn on only when they detect a trace of the chemical. These sensors could operate in a cornfield for an entire season without having to change a button-sized battery. They were developed for hard-to-reach areas such as in water pipes to look for toxins or in forests to detect fires.

While the grant, which is from the Department of Energy’s Advanced Research Projects Agency-Energy (ARPA-E), is focused on the production of corn for biomass, Kim says this technology could benefit all forms of farming. This type of high-tech system for agriculture, known as Smart Farming, can help farmers produce the best crops through the use of data analysis, drones, robotics and the Internet of Things.

“Farmers can use less pesticides and herbicides, and that means lower costs for them while producing a higher yield of healthier foods,” Kim says. “Currently, a major loss in crops is because of insects and weeds.”

In 2017, biomass fuels provided about 5 percent of total primary energy use in the U.S., according to the U.S. Energy Information Administration. Of that, about 47% was from biofuels (mainly ethanol from corn). Most car gasoline sold in the U.S. uses about 10 percent ethanol. The Seriously Dodgy Pseudoscience Behind The Anti-Birth Crusade DROUGHT: U.N.: 2M Somalis could die of starvation this summer