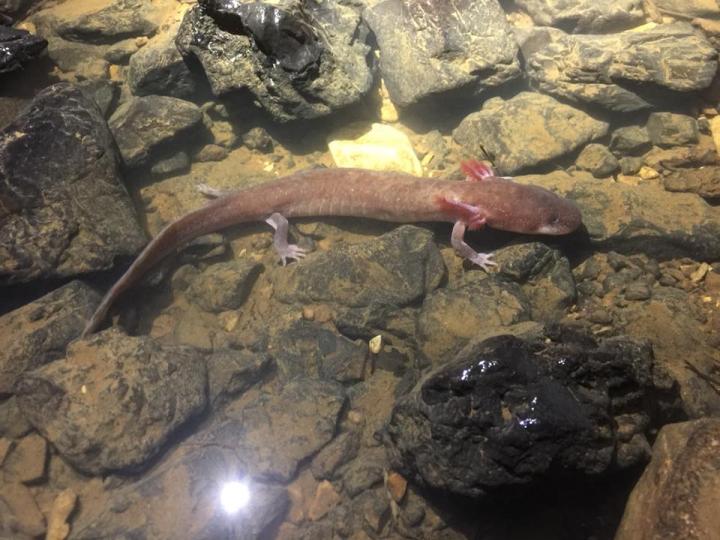 Researchers at UT have discovered the largest individual of any cave salamander in North America, a 9.3-inch specimen of Berry Cave salamander. The finding was published in Subterranean Biology.

“The record represents the largest individual within the genus Gyrinophilus, the largest body size of any cave-obligate salamander and the largest salamander within the Plethodontidae family in the United States,” said Nicholas Gladstone, a graduate student in UT’s Department of Earth and Planetary Sciences, who made the discovery.

The find is making scientists reexamine growth limits of these animals in harsh environments and how hospitable underground environments really are.

Salamanders can be found in a variety of habitats across Tennessee. Some species have adapted to live in cave environments, which are thought of as extreme and inhospitable ecosystems due to the absence of light and limited resources.

Salamanders are one of only two vertebrate animal groups to have successfully colonized caves. The other is fish, said Gladstone.

The record-breaking specimen had some damage to the tail, leading researchers to believe that it was once nearly 10 inches long.

The Berry Cave Salamander can be found in only 10 sites in eastern Tennessee, and in 2003 it was placed on the US Fish and Wildlife Service’s Candidate Species List for federal protection.

“This research will hopefully motivate additional conservation efforts for this rare and vulnerable species,” said Gladstone.

Ongoing research of the Berry Cave salamander is led by UT alumnus Matthew Niemiller, an assistant professor at the University of Alabama in Huntsville. Other members of this research team include Evin Carter (doctorate student in the UT Department of Ecology and Evolutionary Biology), Denise Kendall Niemiller (lecturer in the Department of Biological Sciences at the University of Alabama in Huntsville), and biologist Lindsey Hayter (rescue coordinator at Admiral Veterinary Hospital in Knoxville). Where Did the Right Whales Go?