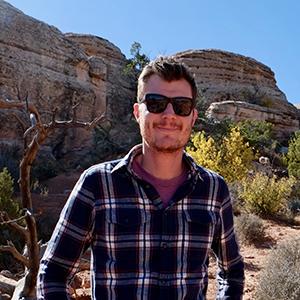 IMAGE: Daniel Nelson, OU postdoctoral researcher, is the 2019 winner of the Hynes Award from the Society of Freshwater Science. view more

A University of Oklahoma postdoctoral research fellow, Daniel Nelson, is the 2019 winner of the Hynes Award from the Society for Freshwater Science. Nelson, an early career researcher in the OU Biology Department, served as senior author on a recent outstanding publication and is being honored with this distinguished award at the society’s annual meeting in Salt Lake City in May. The annual awards recognize achievements in environmental stewardship, service to the Society, and excellence in research for established and new investigators.

“The Hynes Award is one of the most prestigious awards a young stream ecologist can receive. The past winners of this award have all made their mark on the field in different ways, and I expect Nelson will do the same. He is being honored for research that was a remarkable undertaking, warming an entire steam for a two-year period while making regular measurements in it as well as in an un-warmed reference stream. His results were not only interesting, but would not have been possible without such an intensive manipulation in the field,” said Daniel Allen, assistant professor of biology, OU College of Arts and Sciences.

Nelson, a community and ecosystem ecologist, is broadly interested in the effects of climate change on freshwater ecosystems. He received the Hynes Award based on a whole-stream warming experiment in southwest Iceland investigating the effects of warming on stream invertebrate communities and food webs. His work showed that although warming may reassemble invertebrate communities and lower total invertebrate density, it may have a neutral effect on standing biomass due to changes in the size structure of the community.

“This experiment is quite unique because ecosystem-scale manipulations to mimic climate warming are rare and provide a level of realism that laboratory or artificial stream experiments cannot provide,” said Nelson. “The Hynes Award honors my paper, which is based on research I did while pursuing a doctoral degree.” He is continuing his studies on the effects of climate change on freshwater ecosystems in Professor Allen’s laboratory.

The award is named after Noel Hynes (1917-2009), an internationally renowned biologist, considered by many to be the founder of the field of stream ecology. Nelson’s paper, “Experimental whole-streaming warming alters community size structure,” was published in the journal Global Change Biology 23: 2618-2628, doi: 10.1111gcb.13574. The society’s annual award recipients are highlighted here: https://freshwater-science.org/awards-programs/career-awards/2019-awards-announced.