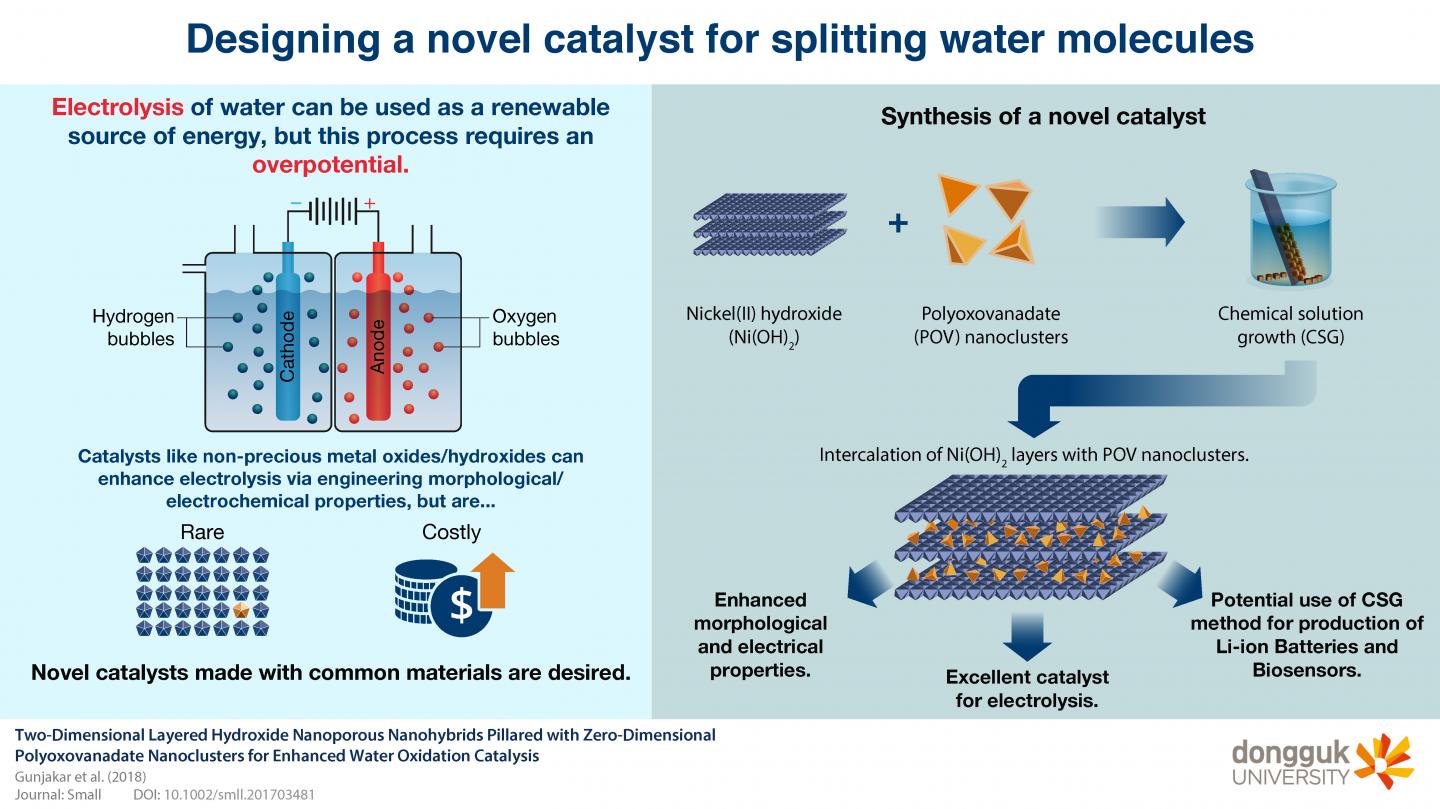 IMAGE: An international collaboration of Scientists at Dongguk University developed a novel nickel-based hydroxide compound that can be used as a powerful catalyst for the electrolysis of water. This material could… view more

The importance of finding and improving renewable energy sources is becoming increasingly important. One strategy to generate energy is breaking water molecules (H2O) apart in an electrochemical reaction known as electrolysis. This process allows us to convert energy from the sun or other renewable sources into chemical energy. However, electrochemically splitting water molecules requires an overpotential–an excess voltage that has to be applied in addition to the theoretical voltage (1.23V vs. reversible hydrogen electrode or RHE) so that the necessary reactions can occur.

Electrocatalysts are materials that, because of their electrical and morphological features, facilitate electrochemical processes. Researchers have been searching for electrocatalysts that can aid in the electrolysis of water, and some of the best catalysts are noble-metal oxides, which are rare and costly. Nickel-based hydroxide (Ni(OH)2) compounds are, fortunately, a better alternative.

A team of scientists, including Profs. Hyunsik Im and Hyungsang Kim from Dongguk University, intercalated polyoxovanadate (POV) nanoclusters into Ni(OH)2 arranged in ordered layers and found that doing this improves its conducting and morphological properties, which in turn enhances its catalytic activity. They employed a promising method called chemical solution growth (CSG), wherein a highly saturated solution is prepared, and the desired material structure naturally forms as the solutes precipitate in a predictable and controlled fashion, creating a layer-by-layer structure with POV nanoclusters intercalated between the Ni(OH)2 layers.

The team demonstrated that the resulting house-of-cards-like structure greatly reduced the overpotential needed for the electrolysis of water. They attributed this to the morphological features of this material; the POV nanoclusters increase the spacing between the Ni(OH)2 layers and induce the formation of micropores, which increases the surface area of the final material and the number of catalytic sites where water molecules can be split. “Our results demonstrate the advantages of the CSG method for optimizing the pore structure of the resulting material,” explains Prof. Im.

Facilitating the electrolysis of water using novel catalysts is a step toward achieving a greener future. What’s more, the CSG method could be useful in many other fields. “The facile CSG deposition of nanohybrid materials may be useful for applications such as the production of Li-ion batteries and biosensors,” states Prof. Kim. Only time will tell what new uses CSG will find. Looking at evolution’s genealogy from home