Fur seals are blocking the way to the penguins' nest – will they be able to go survive and make it back?
Subscribe to BBC Earth for more amazing animal videos – http://bit.ly/BBCEarthSub Watch more videos from BBC Earth: Planet Earth http://bit.ly/PlanetEarthPlaylist Blue Planet http://bit.ly/BluePlanetPlaylist Planet Earth II http://bit.ly/PlanetEarthIIPlaylist Planet Dinosaur http://bit.ly/PlanetDinoPlaylist Check out the other two channels in our BBC Earth network: BBC Earth Unplugged: http://bit.ly/BBCEarthUnplugged BBC Earth Lab: http://bit.ly/BBCEarthLabYouTubeChannel Penguins: Spy In The Huddle
Discover what it really means to be a penguin as the latest spy cameras give us a whole new perspective on the behaviour and extreme survival tactics of these incredible and hugely charismatic birds. Following the success of Polar Bear – Spy on the Ice, the spy cams move to the next level with Penguincam, a range of super-realistic animatronic cameras disguised as penguins, chicks and eggs. Travelling to the freezing Antarctic to focus on the emperor penguins, and interspersing their stories with the very different experiences of the desert-based Humbolt in South America and the Falklands Islands-based rock-hopper, Penguin – Spy in the Huddle gives the inside track on all the drama and challenges they face throughout the year, as well as capturing plenty of comedy moments! The amazing technical wizardry of the penguincams allows them to blend into the penguin colonies, allowing a closer view of the creatures than ever before as they immerse themselves in the penguin world, both on land and at sea, where the camera's disguise leads to some surprising encounters – one penguin even falls in love with rockhoppercam! About BBC Earth: The world is an amazing place full of stories, beauty and natural wonder. Explore the official BBC Earth YouTube channel and meet the animals and wildlife of your planet. Here you'll find 50 years worth of astounding, entertaining, thought-provoking and educational natural history documentaries. Dramatic, rare and wild nature doesn't get more exciting than this. Subscribe to be the first to view new animal documentary videos. You can also become part of the BBC Earth community on Facebook, Twitter and Instagram. Here you'll find the best natural history content from the web, exclusive videos and images and a thriving, vibrant community. Want to share your views with the team behind BBC Earth and win prizes? Join our fan panel here: http://tinyurl.com/YouTube-BBCEarth-FanPanel This is a channel from BBC Studios who help fund new BBC programmes. 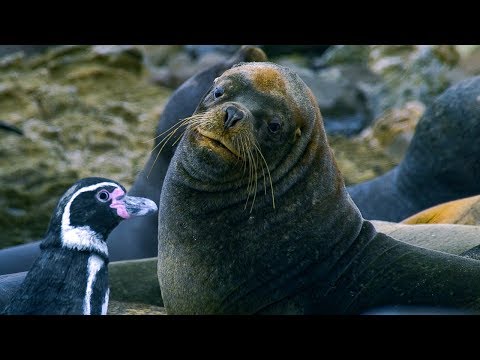 Poppy The Baby Chimp Has A Huge Smile | BBC Earth